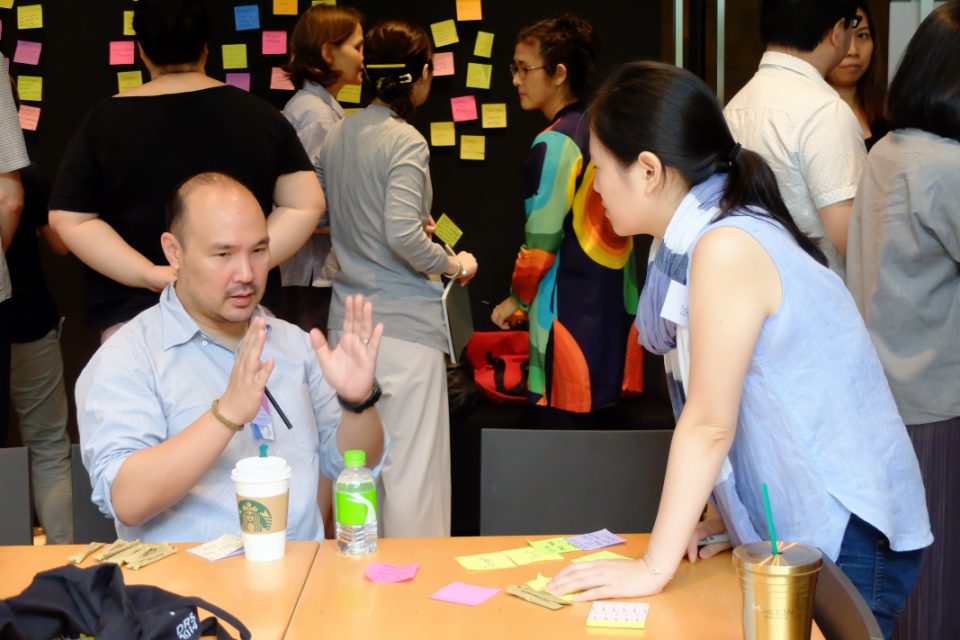 DESIAP embraces broad definitions of design – there is no one model – but it sees designing as a way of giving material and immaterial form to values and worldviews, which are often hidden from view. Design can be a method, an object, a technology, a system or a process, which can take both material and immaterial forms that expresses certain values and worldviews towards specific outcomes. Here, we are riffing off cultural theorists like Giddens and Hofstede, who have likened cultures to an iceberg, composed of layers that can be easily observed in the upper levels and those that are less visible. But instead of a solitary iceberg, we are using metaphors of islands, continents and archipelagos to show relationships of different kinds of designing.

Taken this way, designing social innovation means giving material and immaterial form to meet certain social goals of those participating. Communities and organisations have always tackled problems and effected change to meet certain social, ecological, political goals. Such acts can be called designing (with a little ‘d’), which has been operating under other names, continually incorporating various blends of stories, relationships, materials, histories, philosophies and worldviews in response to particular localities and situations.

DESIAP focuses on design to understand what enabling role it takes in tackling various issues. Awareness of design is increasing in government, businesses and communities alike. DESIAP has been assisting practitioners who may not self-identify as ‘designers’, as they may not have been formally trained in design, to understand what designing is, and to recognise how they are designing in their practices, in self-taught and intuitive ways with the communities they work with. It acknowledges that such practices can be called designing social innovation and seeks to explore the synergies between established fields and discourses of ‘Design’ (with big ‘D’) and ‘Social Innovation’. We take an asset-based approach to build inter-disciplinary capacities.

If efficiency, productivity, and scalability are important values, it follows that the design methods, mindsets, behaviours and approaches will be undertaken to focus, emphasise, and amplify these values to ensure these as outcomes, whether its a product, system, service, to become efficient, productive and scaleable. Design (Big ‘D’) has become very powerful because it has created ways to accelerate, amplify and intensify particular values and worldviews that are dominant and pursued by the powerful, and in turn, have been creating current and future systems, services and products. These Modern ideologies and values, underneath the waterline, are ones we are so familiar with – progress, development, productivity, efficiency, durability, functionality, scalability, standardization, replicability and many more.

Just as the tectonic plates and the forces below the earth’s crust is a powerful force, this has enabled the island of Design to also grow bigger into a massive continent, which we call The Continent of Dominant Design’

The metaphor of archipelagos also refers to significant constellations of designing that are ignored, exoticised, universalised or often appropriated by The Continent of Dominant Design. The archipelagos act as an invitation for us all to identify designing that has been ongoing under other names as both, specialised and everyday practices. It is our responsibility to relate to other names, forms, articulations and practices of designing by paying closer attention, to what is below the water line that matters to groups of people.

Through successive DESIAP events, common features of designing social innovation have been shared and noted (see Fig below). In many cases, communities and change-makers are working in highly participatory ways that resemble established design approaches such as co-design, participatory design and human-centred design. Both co-design and participatory design are human-centred approaches that involve people in iterative processes of problem definition, research exploration, idea generation, evaluate and prototype creative ways of addressing challenging social, political and environmental issues. The highly collaborative nature and shared ownership of the work means there is significant investment of time and effort to build relationships and trust with and within the community and other relevant stakeholders towards empowerment of community. The nature of work is iterative and intuitive, providing multiple points of connection to build a shared understanding of the opportunity / problem being worked on and how best to respond to it.

While designing social innovation observed in the DESIAP network resembles established co-design and participatory design approaches, it is important to recognise that internationally popular methods and models of human centred design are ‘western’ in origin and worldview. This means these models can carry legacies and assumptions of its industrialized Euro-US centric origins that emphasise a linear, uniform, replicable and generalisable process of problem-solving and lateral thinking as the main characteristic of Design (big ‘D’), visualised as divergent and convergent processes. Design here is often framed as neutral, objective and detachable from place, culture and relationships.

It is clear from discussions within DESIAP network that there is not one model of design or ways to undertake social innovation. In other words, in contrast to theoretical models, the realities of designing social innovation is far messier and shaped significantly by its situated contexts.

Don’t miss out on the latest events and resources!

Keep up with the latest news or any upcoming events through our newsletters by signing up using the form below*.